8 Golden Skulls of Holly Roger Megaways is a Megaways slot from Microgaming. Not directly from Microgaming, but in partnership with Buck Stakes Entertainment. The quality is high and you’re in for a real treat.

The Megaways setup is standard with 6 reels and up to 117,649 ways to win. The volatility is high, but the jackpot is decent at more than 6,000x your bet. The hit rate is 32.45%, you can expect a win once per 3 spins on average. To play 8 Golden Skulls of Holly Roger Megaways, sign up at one of our legal EU Casinos. 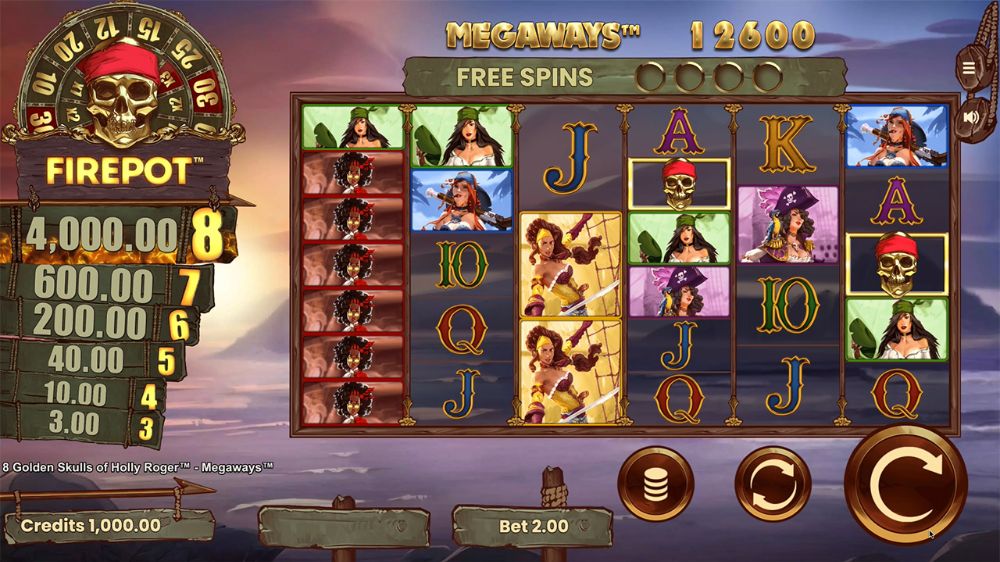 The slot’s min bet is $0.20, making it ideal for small-budget players. Big spenders can play the slots online at the highest stake of $20. It’s not to see Buck Stakes Entertainment lower the max bet. It enables semi-high rollers the chance to win big time. We do advise caution because there’s always an element of risk when you play slots for real money.

The theoretical RTP of 8 Golden Skulls of Holly Roger Megaways is 96.86%. That’s well above average, so it plays fair. It’s not often we see a Megaways slot with such a high RTP. A change in scenery or in this case the RTP is as good as a holiday.

The theme showcases pirates in all their grandeur. The low pays are card ranks from Tens to Aces. They have stylish designs which make them easy on the eyes. For high pays, there are all kinds of pirates to look forward to.

They are female as well which will please most players. It’s a design choice that works well in some slots and poorly in others. It works well here, so expect some fireworks. The production values are neat too. Aussies can check out the pokie Johnan Legendarian at our best casinos online in Australia.

8 Golden Skulls of Holly Roger Megaways combines Megaways with the Rolling Reels Feature. This means that it removes the winning combos from the board. The process repeats itself when new symbols fall in for another chance of winning. This goes on for as long as new combos appear, which can be quite a while.

Treasure Chest symbols work as Mystery symbols. This means that they always reveal matching pay symbols when the reels stop spinning. This improves your winning chances, especially in connection with Megaways.

Find 4 Scatters on a spin and you’ll trigger the Free Spins Feature. There will be a small bonus wheel to determine how many free spins you’ll get. You can also grab a win multiplier of up to 3x on this bonus wheel. The win multiplier applies to all free spins wins, even the Firepot ones. Also, when extra bonus scatters burst onto the reels set you’ll receive more free spins. 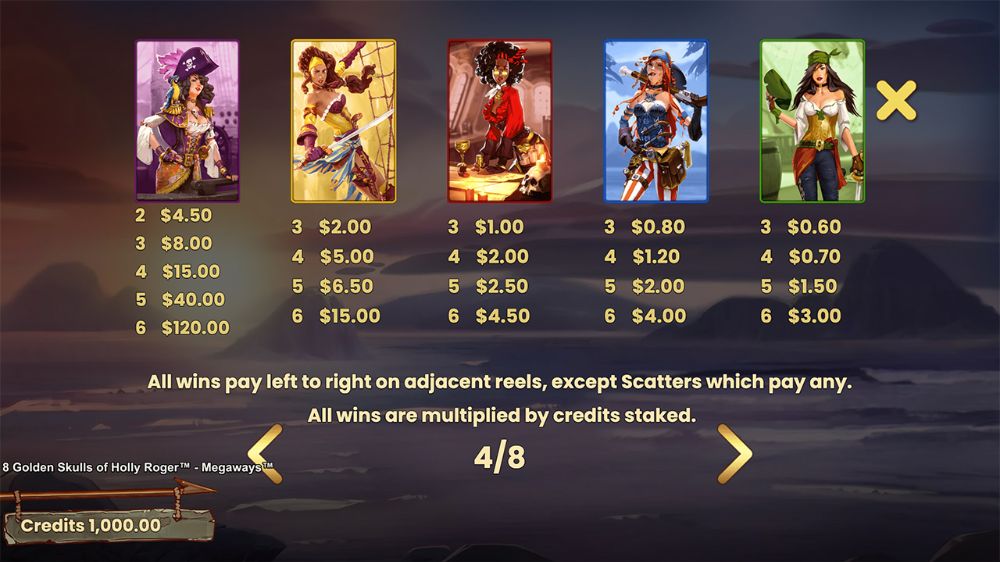 8 Golden Skulls of Holly Roger Megaways is an entertaining romp with engaging bonus rounds. Moreover, it uses the Rolling Reels Feature to good effect. You can also win big thanks to the Firepot Feature, while the free spins are a league of their own.

The theme isn’t too original, as it’s all about pirates. The difference is all the pirates are female which injects the slot with its own individual spin.

If you want to play another slot with a similar game mechanic. We can’t recommend Yggdrasil’s Easter Island 2 enough. The visuals are bright and colourful. Expanding Reels, Respins and Colossal Wilds serve as the game’s specials. The jackpot is 2,500x and it also comes with an RTP of 96%.